This article will focus on the first of the three qualities.

Many people want to be a leader. But the first step on the road to leadership is technical proficiency. In order to lead people, one must first of all have their respect. Nobody will follow someone they do not respect, irrespective of how much they may like (or fear) them. Technical proficiency is the foundation of any manager’s respect. They must be able to manage before anyone will look to them for leadership. Indeed, there is a large grey area between where management stops and leadership begins. The terms leader and manager are often synonymous because they are both concerned with achieving goals and objectives. Management, in my view, is predominantly functional, while leadership is almost exclusively psychological. They are two sides of the same coin, though. Both must be present for either to be effective, and both must work together coherently.

Henri Fayol was one of the first management theorists to define the functions of management. He postulated that managers must forecast what needs to be done, organise resources and persuade others to do what is required by coordinating, commanding and controlling them. Fayol believed that these functions were universal, that all managers perform these tasks in the course of their daily work. While his ideas of command and control may seem old fashioned, I believe they still remain at the heart of all management today, just repackaged and rebranded to appeal to a more politically correct ethos. For example the ABC model (Antecedent, Behaviour and Consequence) of human behaviour is routinely used for command and control. Instead of getting an order to be obeyed, you get an antecedent which will trigger a behaviour bearing in mind a consequence. Those in command simply use different means of control. Fayol’s functions remain, in my opinion, as valid as the day he wrote them although I would now give communication its own category because in the intervening period it has become an essential function in its own right. It’s the grey area between management and leadership. 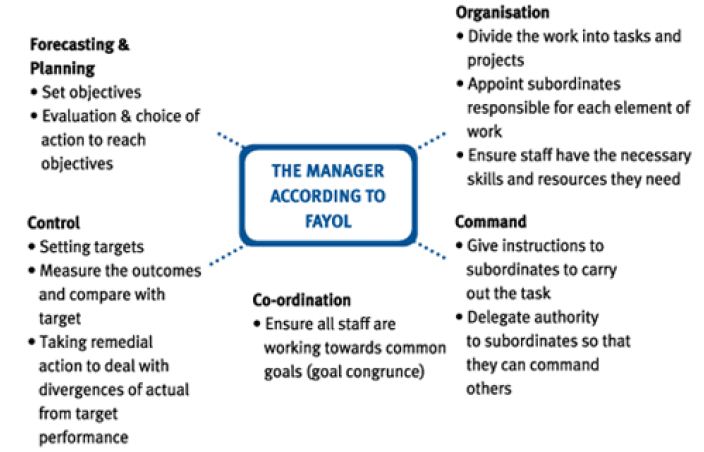 When I examined the 134 responses on the LinkedIn thread (Describe in one word... An effective safety professional is ______________?), I came to the conclusion that of the 82 comments that could be sorted neatly into technical proficiency or character traits: 37 (46%) could be construed as technical traits and 45 (54%) were purely character traits. Of course some of the posts could not be categorised so neatly. For example, my own paltry contribution (valuable) was neither a function of management nor a characteristic of leadership. It is simply the effect of supply and demand. However, the posts that could be categorised into the functions of management were allocated by me as follows:

Planning and Command and Control appear to dominate.

However, it must be acknowledged that the majority of the traits posted were character traits. In fact, a lot of the traits that made it into the function of management were borderline character traits. I just chose to interpret them for the sake of this exercise as functional. For example, ‘Approachable’ was categorised by me as being a communication function. However, there is more to being approachable than simply engaging in an exchange of dialogue. One can approach a cash machine and exchange information, but I doubt that is what the person who posted the word ‘approachable’ had in mind when they made their contribution on LinkedIn. The more I think about the traits posted, the more it seems to me that the traits required to be an effective safety professional are almost entirely character traits. These will be examined in forthcoming articles.